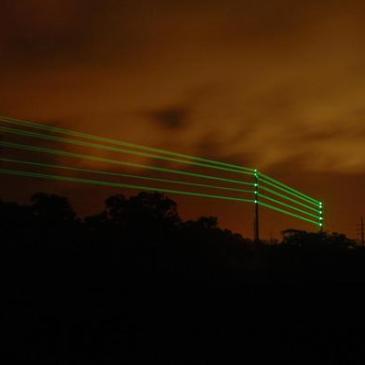 Two major threats to birds worldwide are collisions with power lines and disorientation caused by artificial light sources. This is especially true on the island of Kauaʻi, where both power lines and artificial lights are a serious threat to the three endangered and endemic seabirds, the Newell’s Shearwater, Hawaiian Petrel, and Band-rumped Storm-Petrel. These seabirds are vulnerable to colliding with power lines when they make frequent nocturnal flights from the sea to their montane breeding colonies and back again.  The young of these species are particularly vulnerable to grounding when they become disoriented by artificial lights on their maiden voyage out to sea.

The Underline Monitoring Project (UMP), which is a sub-project within KESRP, has multiple related research avenues: 1) determine where and to what extent seabirds hit power lines or are grounded by lights, 2) identify environmental and behavioral predictors of power line collision and grounding, and 3) conduct experiments testing the efficacy of minimization strategies.  Brief descriptions of the methods used to achieve these three overarching goals are described below. 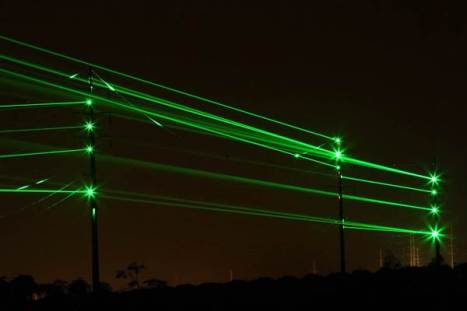 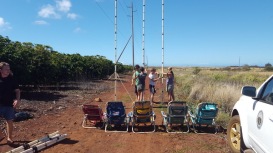 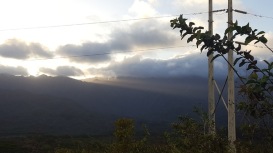 Sunset behind the mountains near Lihue crater

Night vision observation with and without Near Infrared Lights

To visually observe these endangered seabirds during sunrise and sunset UMP staff use binoculars and height guide referencing tools to identify the species of bird and height in which the bird is flying relative to the power lines. Once day turns to night, UMP staff use high-tech gear such as night vision goggles, near infrared lights, and thermal imaging cameras to observe bird interactions with the power lines. Our visual observations can be divided into low and high elevation surveys. At low elevation sites, we can drive to the survey location. However, some of the most hazardous power lines for seabirds are located in the mountains of Kauaʻi where high voltage lines run from ridge line to ridge line. To conduct surveys at high elevation sites the UMP crew and equipment are transported in and out of the field using helicopters. 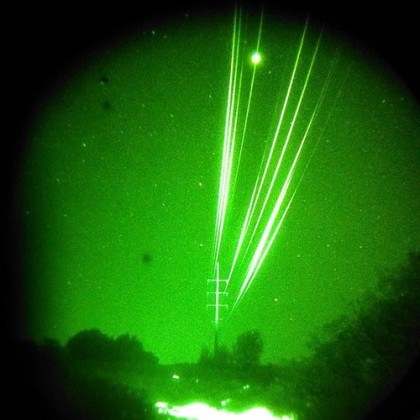 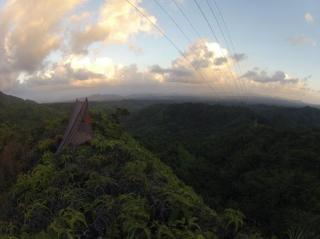 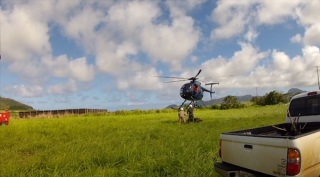 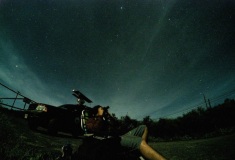 Helicopter coming in to pick up slingload on power line trail

Getting to some recording devices takes you through difficult terrain 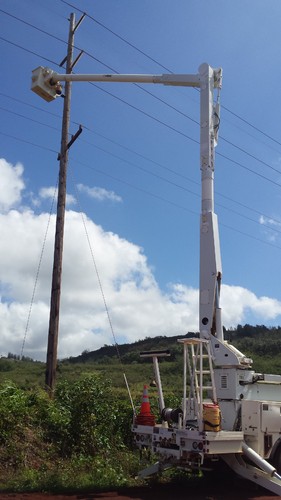 Lineman tapping the wires to replicate the strike sound

Deploying a recording device could be hard work, but always worth the view! 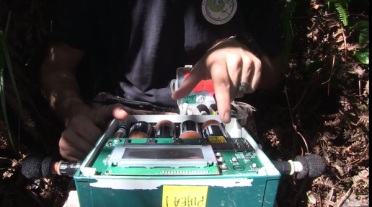 Through visual observations and acoustic monitoring, UMP has identified several collision hot spots on the island. Once high-risk sections have been identified, the local power authority has several options to eliminate or reduce collision rates, including under-grounding the wires, lowering the wires, or removing the top static wire. Utilizing UMP data and advice, the power authority has already begun under-grounding wires and removing the top static wire in key high-risk locations on Kauaʻi. However, in some circumstances, it is prohibitively expensive to relocate the wires underground. In these locations, we have been developing and testing alternative solutions. For example, in 2012 we formulated the concept of using several lasers projected from one pole to the next to produce a “laser fence” that is visible to birds in complete darkness. We have been conducting in-house development of solar powered field laser units to achieve this goal. A major component of the UMP is to conduct field experiments to test the minimization efficacy of the lasers and other bird diverter strategies.

The laser mitigation fence in operation 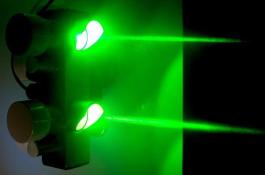 Mountain power lines before we identified them as high collision risk

The UMP conducts systematic searches for grounded birds and performs observer based surveys at major light sources around the island.

To reduce seabird disorientation by artificial light sources, we have begun a collaboration to study the eye physiology of the seabirds. Our goal is to determine the birds’ visual spectrum, and then develop lights that emit wavelengths focused in the troughs in their visual range.

Reducing light pollution, particularly near the coast, is needed to reduce the rate of seabird grounding

Once grounded seabirds face many threats including feral cats, dogs, and being hit by cars

Radar systems are used to understand the passage rate of endangered seabirds flying on and off the island. On a given night, radar allow us to quantify bird passage rates on a much larger scale then when using observers. The UMP utilizes two types of radar systems: standard marine radar mounted on an SUV and S-band vertical and horizontal combined radar.

Radar surveys are conducted at a number of different locations all around Kauaʻi.

The monitor displays seabirds flying by the radar survey area